Exhibition “The Flowers of Blue Deeps”

Martynas Mažvydas National Library of Lithuania invites you to the joint exhibition “The Flowers of Blue Deeps” featuring the paintings of Danguolė Raudonikienė (b. 1937) and composer Dalia Raudonikytė With (1970–2018).

D. Raudonikienė grew up in exile in Eastern Siberia, where she graduated from the Irkutsk Institute of Foreign Languages. After returning to Lithuania, she worked successfully as a translator and English teacher. This artist started painting at the art studio “Paletė” (her mentor was Rimas Zigmas Bičiūnas), where the tradition of naive art has been fostered since the studio’s foundation in 1971. The creations of D. Raudonikienė are part of the second generation of representatives of Lithuanian naive art, whose creative expression is influenced by modern visual culture and urbanism. Like other Lithuanian naive art painters of this generation, in her work D. Raudonikienė focuses on viewed landscapes and conveys the change of seasons, panoramic views of Vilnius, city and rural festivals, moments from family life, and still lives of flowers. On the other hand, the scenes in this artist’s paintings stand out with gentle melancholy and subtle humour, and the style of painting, which is dominated by bright but harmonious colours and generalised forms, is characterised by spatiality and reserve. The temperate style of the artist’s paintings invites the viewer to take a look, to discover the nuances of colour and form, which are often created using an open and rich blue colour and its halftones. An example of such creation is the series of blue flower bouquets, which D. Raudonikienė has been painting for several decades; in this series, different moods and emotional states are conveyed using the same thematic motif and colour scheme.

At the exhibition, works of D. Raudonikienė are displayed next to the paintings of her daughter, the composer of orchestral and electronic music, D. Raudonikytė With. The expressive, free-form painting of D. Raudonikytė With can be perceived as the continuation of her experimental, minimalist, contrasting musical spaces. Although the composer‘s music is characterised by literary, philosophical references and interdisciplinarity, the exhibition features expressive painting and its plots in an open and intimate conversation with the naive style works of D. Raudonikienė.

Naive art, which is practiced using academic norms of expression, and mostly by self-educated creators, is today perceived as an independent artistic expression form. The creations of representatives of naive art often become part of international art biennials (for example, the Venice Biennale “Il Palazzo Enciclopedico” organised by Massimiliano Gioni in 2013), it is included in the programs of global art centres (such as the Tate Museum in the UK) and its collections are stored in specially created institutions. Some members of this genre, such as Frenchman Henri Rousseau (1844–1910) or Kartvelian painter Nick Pirosmani (1862–1918) are widely recognised internationally.

The D. Raudonikienė and D. Raudonikytė With exhibition “The Flowers of Blue Deeps” is the second exhibition of naive art in the renewed National Library. It invites you to look at this genre while abandoning your preconceptions and perceive this art as an integral part of Lithuanian art history.

D. Raudonikienė has been a member of the Lithuanian Folk Artists' Union since 1990. In 1987, she was awarded a bronze medal for the work “Horse Racing ” at the Union Folk Art Exhibition in Moscow. In 2005, she was granted the premium of Adomas Varnas. The artist has organised about 20 personal exhibitions, her works have been acquired by Lithuanian and foreign art institutions such as the Lithuanian Art Museum, National M. K. Čiurlionis Art Museum, Rokiškis Region Museum, Finnish National Folk-Art Museum in Helsinki, Lithuanian Embassy in the USA, Lithuanian Folk Artists' Union Foundation and private collectors in various countries of the world.

D. Raudonikytė With - a member of the Lithuanian and Norwegian Composers' Unions. She studied composition in the class of Professor Bronius Kutavičius at the Lithuanian Academy of Music in 1990–1995 and she continued her master's studies with Professor Osvaldas Balakauskas in 1996. In 1998–1999, the artist studied composition and electronic music in the class of Professor Lasse Thoresen at the Norwegian Academy of Music. Her works include orchestral, electronic, vocal, chamber music compositions and works for organ and choir. D. Raudonikytė With compositions were performed at the international contemporary music festivals “Young Music” (1992, 1996, 1998), “Druskininkai” (1994, 1995), “Atžalynas” (1996), “Festspillene i Bergen” (2001), “Oslo International”, “Tune” (1997), as well as at the Church Music Festival in Norway, the Floralia Music Festival in Poland, the New York Film Festival, the New York Electronic Art Festival in the United States, and others. Her music is characterised by the monotemic creative method, where short motifs of several notes are developed according to the intended dramaturgy of the work. In 2017, together with music publisher New York's “New Focus Recordings”, D. Raudonikytė With released the first and only CD of her music, “Solitarius” (from the Latin for single).

The exhibition will be on display until 13th September of this year, during the working hours of the National Library, in the atrium, on the 5th floor. Admission is free.

IMPORTANT! The number of spectators is limited in accordance with security requirements. Visitors with acute signs of upper respiratory disease will not be admitted to the event. Participants are advised to wear protective face masks. We apologise for any inconvenience caused.

Briefly about the exhibition 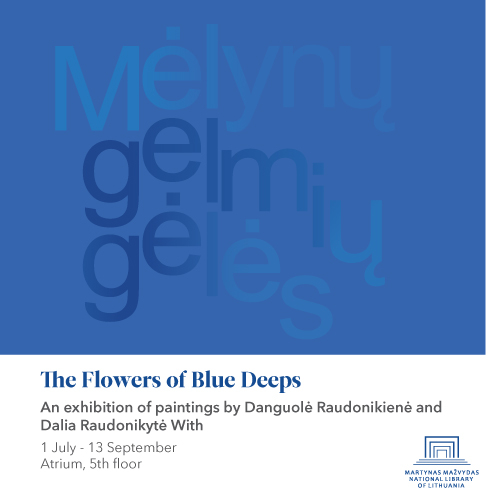