A new incunabulum has been identified by the National Library

The Rare Books and Manuscripts Collection of the Martynas Mažvydas National Library of Lithuania has been expanded by the addition of a newly identified incunabulum. It is a textbook for priests titled Tractatus sacerdotalis de sacramentis by Polish theologian Mikołaj z Błonia (Nicolaus de Blony; ante 1400 – circa 1448). The textbook was written in Latin and was published in Strasbourg by the printing house of Martin Flach (d. 1539) in 1490.

It contains teachings about the Holy Mass, sacraments, excommunication, and interdict, as well as abundant practical advice: the laity was supposed to receive Holy Communion three times a year (during Christmas, Easter, and Pentecost), and the pax had to be kissed during any other mass; it also stated that wine, saliva, and human urine were not suitable for baptism. The book was first published in 1475 in Wroclaw. It was very popular not only in Poland but also throughout Europe. The incunabulum was distributed in handwritten copies. There are 47 surviving manuscripts held by European libraries. In the 15th – 16th centuries, it was reprinted in over 40 editions.

The title page and several last pages of the incunabulum held by the National Library are missing. The opening segment of the book contains 29 manuscript pages, most of which feature a 15th-century theological work Expositio canonis sacratissime misse by German Cistercian monk Balthasar de Porta dating back to 1523. It was written in an ornate style by an unknown book owner. The surviving records in Latin and Polish suggest that the book had a number of owners. In the 19th century, the Seminary of the Diocese of Vilnius, the last known owner of the book, rebound the book according to a particular bookbinding style which was popular during that period: the hard cover of the book was bound in brown marbled paper, and the spine was lined with leather.

Incunabula, the first printed books published before 31 December 1500, are considered to be a particularly important part of the documentary heritage. The National Library currently holds 91 incunabula. A total of 521 incunabula are stored in Lithuanian memory institutions. 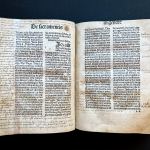 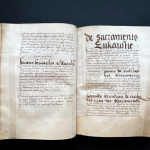