On 6–8 April, the director general of the Martynas Mažvydas National Library of Lithuania, Prof. Dr. Renaldas Gudauskas, participated by invitation of the Lithuanian embassy in Prague in the ‘Czech-Baltic Century’ literary exhibition initiated by the Lithuanian, Latvian and Estonian embassies. The event was dedicated to a hundred-year-long diplomatic history between the Czech Republic and the Baltic states.

Hosted at the Klementinum, the main building of the Czech National Library, the exhibition showcased Lithuanian, Latvian and Estonian books that had been published in the Czech language over the past hundred years.  The event highlighted the variety of Estonian, Latvian and Lithuanian works translated from 1922 to the present day, changes in publishing trends linked to turning points in twentieth century history and the most prominent translators.

Among the speaking guests were the ambassadors of all three Baltic states and Tomáš Foltýn, the director general of the Czech National Library, as well as notable dignitaries from Lithuania: chairwoman of the Seimas Foreign Affairs Committee, Laima Liucija Andrikienė, and the director general of the Lithuanian National Library, Prof. Dr. Renaldas Gudauskas.

In his address, the head of the Lithuanian national library paid special attention to common European values and the continual search for intercultural dialogue ‘as this is especially important and relevant in the context of current geopolitical events’. ‘Speaking in the Czech language, our first writer of fiction, Kristijonas Donelaitis, or our classic twentieth century writers, Romualdas Granauskas, Justinas Marcinkevičius, our most prominent twenty-first century authors, Jurga Ivanauskaitė and Alvydas Šlepikas, are the true ambassadors of Lithuanian culture, helping build cultural bridges. I would like to believe that these bridges will withstand current historical challenges and consolidate the ties between our countries,’ laid out Prof. Dr. Gudauskas.

As part of the visit, the Lithuanian delegation met with the heads of the National Library of the Czech Republic. Prospects for collaboration between the two institutions were discussed. According to Prof. Dr. Gudauskas, the decision was made to continue the binational cooperation and joint cultural activity on an international scale, developing cultural diplomatic efforts based on an exchange of values, traditions and other markers of culture or identity that would reinforce the common social and cultural activities. Head of the Czech National Library, Tomáš Foltýn, supported the idea of hosting a similar exhibition that would present Lithuanian translations of Czech works in Vilnius, at the National Library, in the latter half of the year as the Czech Republic takes over the presidency of the EU Council.

The ‘Czech-Baltic Century’ literary exhibition will be open in Prague until 7 May.

Images courtesy of the Embassy of Lithuania in Prague 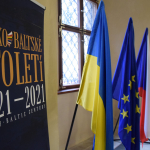 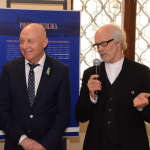 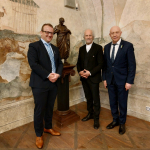 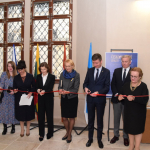 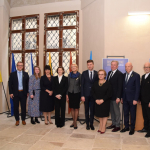