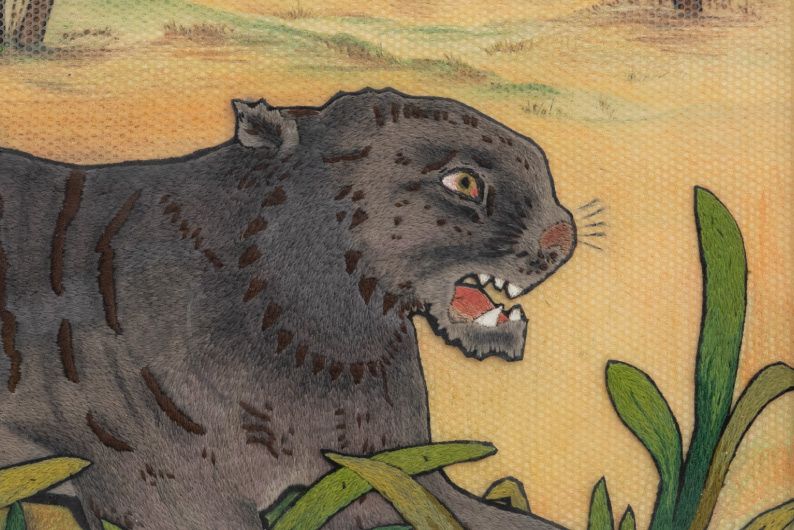 An exhibition of lace and drawings by the folk artist Jadvyga Lapinskaitė-Dirvianskienė, dedicated to the 30th anniversary of her death, will be on display in the atrium of the 5th floor of the Martynas Mažvydas National Library of Lithuania from 11 July, 2022.

Lace began to spread in our country at the beginning of the 19th century. Their traditional color was white and reddish grey (the natural colour of linen and hemp yarn). Geometric patterns, floral and bird motives were crocheted. With decorative lace, Lithuanians decorated the edges of towels, pillows, pillowcases, sheets, aprons, crocheted tablecloths, bedspreads, and the ends of bedspreads. Crochet, knitting and embroidery have now become a folk art and business - an international art understood by women all over the world.

Folk artist J. Dirvianskienė’s laces cover a wide spectrum. Her extensive textile treasure trove includes ornamental plant compositions made from knitted flower petals and leaves (on  arcs, in vases and baskets), one-of-a-kind wall rugs, as well as napkins and tablecloths. However, for the sake of visual integrity, this exhibition includes examples of larger crocheted works, as well as landscapes and floral still lifes painted with colored pencils.

Diligence and patience requiring works are eye-catching with interesting compositions. For example, the flower and plant compositions in arcs – like a decorative “pano” – are an authentic form of J. Dirvianskienė’s imagery, while the wall carpets in traditional shapes, considered to be the “top” of her work, are distinguished by the diversity of their patterns, consistency of their colors, and their playfulness. The colors are folk-like, close to the national colors of the Lithuanian nation.

Dirvianskienė’s works are distinctive, subtle, authentic, and masterful, while her color combinations feature originality. In addition to her great craftsmanship, they reveal the artistic intuition of the folk artist. Thus, with her beautiful, tasteful works, the artist has enriched the Lithuanian applied art branch - crocheting with hook - and has shown the immense possibilities of the simple hook.

Sincere gratitude to Nijolė Dirvianskytė for the artwork loaned for the exhibition.

I was born in a large family, the fifth child – a grandchild. Vladas Lapinskas - my dad, came from Vievis (Naručionys village), (...) met an orphan Uršulė Vingrytė from Anykščiai - my mother. The family was struggling (...). Father Vladas was a tireless worker who went to America twice for work.

All five children grew up in Anykščiai, got an education, and went out into life. I graduated from the Belvedere Higher School of Dairy Farming (...) I worked as an accountant.

On 18 June 1941, I married Vytautas Dirvianskis, an educated nobleman from Samogitia; on 21 June, the Germans occupied Lithuania (...).

On 22 May 1948, with my husband and our two small daughters Vida and Nijolė in a cattle car, we “left” for Siberia beside Lake Baikal. Very hard physical work, semi-starvation, cold, insults from locals (...). After Stalin’s death, things in Siberia got a little easier - we had our own room, a cow Dina, a pig, four chickens and a cat. In the long winter evenings I wrote poems and prose, played the guitar, sewed, made embroidery, painted... Already in my childhood I was very careful and patient with my embroidery and paintings.

In 1957 we all came back to the beloved Lithuania – we needed it, however, it did not need us…

In 1968, I retired to a well-earned rest and threw myself wholeheartedly into my creative work.

In 1972 J. Dirvianskienė joined the LSSR Folk Art Society, and in 1975 she held the first exhibition of her works. In 1980, the fourth anniversary exhibition was organized. The artist’s works have been exhibited in Moscow (in 1974 and 1992), Murmansk (in 1992), as well as in various Lithuanian cities: in 1981 at Martynas Mažvydas National Library of Lithuania (Vilnius); in 1982 at the Klaipėda Museum of Folk Art; in 1983 at the Kaunas State Museum of History and the sanatorium “Lietuva” (Druskininkai); in 1987 in her native Anykščiai; in 2000-2001 in Plungė, Plateliai, Skuodas, and Telšiai (joint family exhibition). The folk artist’s work has been awarded with prizes, and in 1987 J. Dirvianskienė’s book “Decorative Lace” was published, where compositions of crotched decorative flowers and plants with a hook, as well as photographs of wall rugs, napkins, paths, descriptions of her work, and her patterns and schemes were presented.