On 24–30 July, on an invitation of the International Federation of Library Associations and Institutions (IFLA), the Director-General of the Martynas Mažvydas National Library of Lithuania Prof. Dr Renaldas Gudauskas participated at the 87th IFLA World Library and Information Congress in Dublin, Ireland. Dublin was also the venue for the annual meeting of the conference of Directors of National Libraries (CDNL). The secondment’s purpose was to participate at annual IFLA and CDNL events and represent Lithuania’s National Library.

The World Library and Information Congress in Dublin gathered more than 2 000 participants from 100 countries. They were welcomed by Lord Mayor of Dublin Caroline Conroy, the former Irish President Mary Robinson, the IFLA President Barbara Lison and Vicki Mcdonald, President-elect of IFLA (for the 2023–2025 period).

The very first session of IFLA’s Europe’s Regional Division featured discussions about how libraries and library associations could help the colleagues in Ukraine. The Chair of EURDC Stuart Hamilton presented the work done by EURDC and members of its Committee. The war in Ukraine and its consequences was a topic of the moving speech by Ukraine’s representative Oksana Boyarynova. The session observed a minute’s silence in memory of the victims of the war. Boyarynova said that, up to 28 June, the 155th day of the war, more than 60 libraries were destroyed in Ukraine and hundreds of them were damaged. Attention was drawn to the fierce disinformation war that was going on. The Ukrainian Library Association (ULA) together with partners are actively engaged in the information warefare. ULA also provides assistance to persons displaced because of the war (especially children) by offering resources, trainings and services. The speaker pointed out that it is important that people in other countries would not walk away from the events in Ukraine.

The IFLA Congress deliberated important issues related to the organization’s activities and held seminars devoted to the discussing issues and perspectives of the development of knowledge management and artificial intelligence, professional advancement, qualifications development and improvement of library systems

The CDNL Conference approved the results of the election of its Chair, discussed issues related to its budget, etc. The next CDNL conference will take place in Rotterdam, the Netherlands, in August of the coming year. 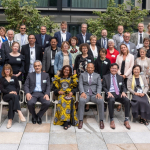