7–9 August saw the presentation of the art project of the Martynas Mažvydas National Library of Lithuania ‘Representation of the Cultural History of Lithuania in the Contemporary Interactive Artistic Format’ at the Locarno Film Festival in Switzerland by this Library’s Director-General Prof. Dr Renaldas Gudauskas. On 8 August, Renaldas Gudauskas participated at the world premiere of the documentary film ‘Prologos’ created by Marius Kvedaravičius, a film director and cultural anthropologist, who was killed by Russian occupants in the city of Mariupol in Ukraine on 30 March this year. The film was presented by its producer Uljana Kim.

The rich programme of the Locarno Film Festival was taking place in the city’s various locations. The video material featuring objects of the documentary heritage presented by Lithuania’s National Library reflected historical and cultural ties of communities of the multilingual and multicultural Vilnius with the state of Lithuania as well as showed the potential of using heritage and archival collections in the creation of modern content and forms. The festival screening also included the documentary ‘For Our and Your Freedom’ by the Ukrainian director Larysa Artiugina, who virtually participated at its presentation.

The project’s presentation was initiated by the Locarno Film Festival and the Leonardo da Vinci Art Gallery in Locarno ‘Il Rivellino’. The project was financed by the Lithuanian Council for Culture.

At the Leonardo da Vinci Art Gallery ‘Il Rivelino’, the Martynas Mažvydas National Library of Lithuania presented the interactive art object ‘Kristijonas Donelaitis, the Homer of Lithuania’ based on the poem ‘The Seasons’ by the classic of the Lithuanian literature Kristijonas Donelaitis. Some time earlier, this art object was exhibited in the Lithuanian pavilion at the World Expo 2020 in Dubai, United Arab Emirates, where it attracted great attention of visitors.

In July 2021, Lithuania’s National Library signed a cooperation agreement with the art establishment of Locarno ‘Il Rivellino’ LDV Cultural Center & Art Gallery. The subject of the contract is international cooperation in organising activities of cultural events and platforms of cultural and media diplomacy as well as carrying on dissemination of information. The agreement is important for the development of the cooperation of the two countries and for the pursuit of activities that are part of cultural diplomacy within mutually agreed areas 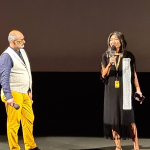 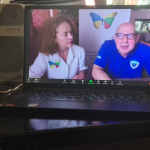 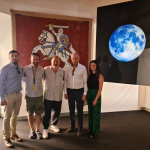 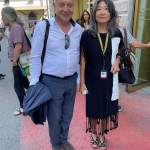 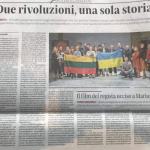