On the occasion of the Statehood Day and the National Anthem Day, Lithuanian President Dalia Grybauskaitė awarded state orders and medals to Lithuanian and foreign citizens for their merits to the Republic of Lithuania and for promoting the name of our country in the world.

According to our country’s president, we need more people like those honoured at the ceremony; genuine citizens who are there for us, who we can trust and with whom we can create and work towards achieving ambitious goals.

We are very happy and proud to congratulate Jonathan Brent, Executive Director of the Institute for Jewish Research (YIVO) and fosterer of the history of Lithuanian Jews, for being presented with the Cross of the Knight for Merits to Lithuania.

Martynas Mažvydas National Library of Lithuania maintains a close cooperative relationship with the YIVO Institute and its Director J. Brent. Our institutions have partnered in implementing several important international projects. J. Brent has received an honourable state award in recognition of his meaningful contribution.

The publications of the Jewish community of Vilnius discovered in various libraries after the restoration of the country’s independence are stored at the Judaica Research Centre of the National Library in Vilnius and are being digitised under the YIVO Vilna Online Collections project, in this way reuniting them with the publications from the archives of the YIVO Institute (the official project title is the Edward Blank YIVO Vilna Online Collections project). The Director of the YIVO Institute J. Brent has emphasised, on numerous occasions, the importance of the project in preserving, digitising and creating the largest digital collection preserving the historical memory of Eastern European Jews. During the project, the surviving documents and prints of the Lithuanian Jewish community are being identified, restored, digitised and presented to the audience interested in them.

The National Library and the YIVO Institute have successfully entered a new stage in their cooperation involving the analysis of the manuscript collection of the Judaica Research Centre. One and a half years ago, in his address at the opening of the exhibition of the newly found items of Jewish documentary heritage, the YIVO Director J. Brent said: “This discovery becomes even more relevant in light of the increasing nationalist extremism around the world. It serves us as a reminder of the constant efforts to destroy people by erasing their memory from history. But at the same time it reminds us that the preservation of culture is a communal task as in this case of the cooperation between Jews and other nations in an attempt to keep people’s spirit and memory alive. The newly discovered documents will allow us to remember the Eastern European Jews and enable us to actually “read” the past. 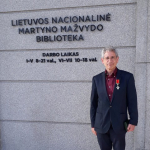